Tea towels are indigestible; postal mishaps; and a blustery day

You'd think I don't feed them. Outside, it's plastic flower pots - ripped apart; shredded and littered all over the grass. Scattered amongst the chewed plant supports, logs and bits of this-is-big-so-we-can-both-tussle-with-it-and-when-we're-tired-have-an-end-to-chew-each fencing. Plus a couple of no-longer-functional-due-to-severe-mauling brushes and a mis-shapen trowel.

Inside, this week, it's been assorted socks; one cow-shaped-or-rather-was-cow-shaped slipper; a wine bottle ... smashed into that's-a-bit-scary-and-sharp-and-oh-dear-I-think-I'm-in-trouble-again-so-I'll-back-away-from-them-and-put-on-my-best-hang-dog-remorseful-expression bits (thankfully); a bath mat; a pair of wet swimming trunks and a tea towel. But the tea towel is the only thing (as far as I know ... so far) that was actually eaten. I'll leave it to your imagination to work out how I know that it was eaten.

I'm not a bad parent - really! - everything is at above-dog-nose height, including the glass recycling bin, but now it has to be above bouncing-puppy-height, too. The utility room, daily, looks like a battle zone. Paper out of the paper bin; dog-bed filling flung into every corner; odd socks - washed, slobbered on, chewed and returned to the wash basket; and footwear cowering behind a so far dog-impregnable-butchered-play-pen fence.

And from today, in addition to a gardener and a cleaner, the dogs need a new post-man ... no, they haven't eaten him! Specifically, they need a solid, chew-resistant, post-box for big post - the post that won't fit through the letter box: the post that, if left propped against the door, looks exactly like a new toy and, even if an intended birthday present, will be treated like a dog toy i.e. destroyed in less than the time it takes me to notice they have "found something", don wellies and run out of the house.

I have in mind a wooden box and a heavy brick.

Bertie Baggins was terribly pleased with himself. Especially when I chased him. With a brick round his neck he may find it harder to destroy  toys ... just kidding! Checking you are paying attention - brick is for box lid, not dog collar. Which reminds me - ID label has disappeared off Bertie's collar ... gone the way of the tea towel? Think I'll order another one ... rather than wait!

Where has spring gone?

Littlest is reading AA Milne - fantastic laughs this evening when Pooh's 'heaviest stone I can carry' was dropped on a slowly rotating Eeyore making him 'disappear' into the stream (Poohsticks chapter). And Pooh was in my mind earlier, when I took the dogs for a walk on an exceedingly 'blustery day.' 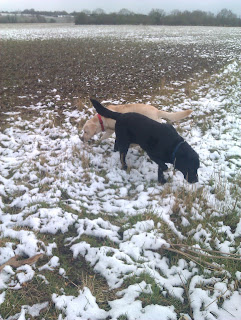 Photographs don't really do wind, but as Piglet said "My nose is froze and my toes are froze" (or was that  also Pooh?)

Dogs not too froze for the water, though 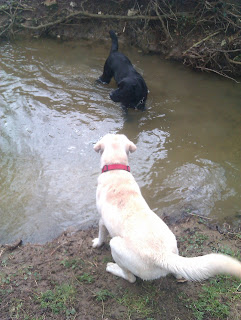 Bertie Baggins not at all sure about it 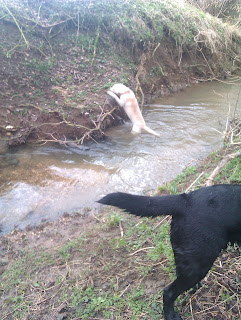 But once in ... brief moment of panic when I thought I might have to go in to rescue him. Instead, his uncle showed him the way out ... onto the opposite side of the stream. 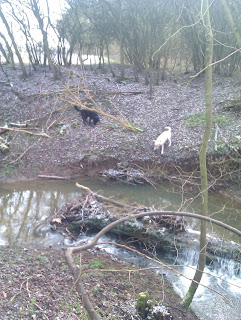 Enticed back with biscuits, we continued to the scary bridge: actually, very slippery bridge - maybe Four-Legged-Friend was trying to tell me to take care with his spread-legged-hesitant-small-stepping body language 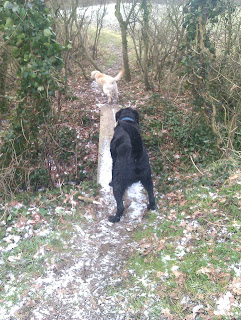 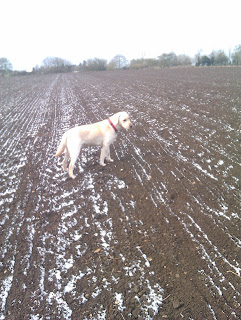