Colour, Delacroix, flochetage and why don't we all have a go at inventing words

April 29, 2016
Yes - it is a real word. Flochetage. Well, a real-ish word. One invented by the painter Delacroix, when he found the dictionary cupboard bare and required a word to describe his technique of layering different coloured paints, using lightly pulled brush strokes to create texture and pattern and thereby enhance his base-layer colours (... lost? - stick around, read on and all will become clear. Or perhaps muddier ...).
Flochetage implies both stringiness and threadiness. Apparently. And it sounds good - in a filling-the-mouth-with-sound sort of a way. Try it ... flochetaaaage. Not that I speak French. So I am probably mis-pronouncing it. Nor am I an artist. So what do I know about painting techniques - except that I think this one works. What I do like is the concept - you invent a new technique in whatever it is you do, hunt around for the vocabulary to describe it, find the dictionary is lacking, so make up a word of your own and announce to the world what it means.

Authors do it all the time -

'A-sort-of-hockey-crossed-with-volleyball-and-tag-played-with-balls-one-of-which-will-try-to-maim-you-and-a-flying-golf-ball-which-you-have-to-catch' doesn't quite have the same ring to it as Quidditch (which, interestingly, this version of Word doesn't recognise).

Pointillism and Ben-Day dots - painting and printing techniques respectively -  are words invented to describe the same thing - a deliberate repetitive sweep of dots across a canvas, clustered to create shape and depth.

The king of word-inventing is of course Shakespeare - turning nouns into verbs, adding prefixes, chucking around suffixes. There are hundreds attributed to him. What follows are just a few -

Dickens was the same, often splicing existing words together - butter-fingers, slow-coach, dust-bin and casualty-ward are all his. As is the unspliced flummoxed.

AA Milne gave us the heffalump and the woozle. Less universally useful perhaps but memorable all the same.

Artists other than Delacroix did it too -

Pointillism and Ben-Day dots - painting and printing techniques respectively -  are words invented to describe essentially the same thing - a deliberate repetitive sweep of dots across a canvas, clustered to create shape and depth.

Scientists have been doing it since science was invented - a hundred years ago we didn't need the word boson because it wasn't until the 1920s that Einstein and Bose proposed the existence of elementary particles and the particles had to have names. Penicillin, paracetamol and warfarin are all  words, along with X-ray, electromagnetism and chromatography that Aristotle would not have understood (although, he may have had a go at deciphering some of them ... chromato- and graphia- both being Greek. Perhaps, that wasn't a good example. And oops! - elektron also has Greek origins.)

So, back to Delacroix and his word flochetage - what is it?
Imagine a gauze bandage; gently pull it apart just a bit, then crumple it slightly. Stain it in middle or lighter hues of a secondary colour and then place it on a background of deeper, stronger primary colour e.g. pale orange place on red. Look at what you have, then paint it. There you have it - flochetage. Easy! ... if you know one end of a paint brush from another. And how to 'do brush-strokes.'

Delacroix clearly knew both. He was a Romantic painter who inspired the Impressionists - don't worry, I knew nothing about him before my trip to the National Gallery yesterday either. It was one of those I-have-a-couple-of-hours-to-kill art-exhibition visits, which are often the best because you arrive with no expectations. As I have said already, I am not an artist. I am also not a student of art history. But I do know what I like (a bit like my opinion on different wines - if I like it, I'll drink it. If it's not expensive, that's a bonus, not necessarily a choice. Sadly, all the paintings I like are expensive). I think that art appreciation for me, and I suspect for many others, is all about the initial emotional reaction to the painting. Walk me up to a Cezanne and my insides go Wow! A room filled with Matisse, Monet and Pissarro would make me want to linger there for hours. I get Rothko; I love the huge dramatic presence of his paintings, although I understand why some don't ... all that black - blocks and lines - on backgrounds of solid colour. But I'd argue it's the depth of that colour, the sincerity and peace of the whole that creates the impact.
The Delacroix paintings didn't move me in the way that paintings by these other artists do. I felt slightly guilty as I wondered if it is wrong to go to a exhibition of one artist's paintings only to find that I preferred the paintings of the other artists on display with him. Actually, that he did inspire so many - Renoir, Cezanne, Matisse, Van Gogh, Gaugin, Signac and Monet - who went on to become household names is pretty awesome. And his paintings weren't at all bad. I love it when artists play with light. One painting by Delacroix, named 'Women of Algeirs in their Apartment,' depicts the drawing-back of a heavy curtain to reveal the seated women of the title. So, at first glance, it serves as a commentary on everyday life. But only if that first glance is fleeting. Look any longer and it becomes so much more. A low light source hidden behind the curtain shines on the women's faces and limbs, highlighting detail in the fabrics of their clothing and reflecting off a high mirror. It also illuminates a solitary pale orange flower, in a vase, sitting on the sill of a high recess in an otherwise shadowy wall above them. This is story telling with paint and a brush. And it is beautiful. If you go to see the exhibition - on at the National Gallery until May 22nd- indulge me for a moment and pause at a Delacroix painting titled 'Basket of Fruit in a Flower Garden' and marvel at the lustre on the grape and tomato skins and acknowledge your intake of breath when you see the texture of his peach skin; so life-like that you can almost smell it and imagine reaching across the rope to snatch it from the bowl. This may result in your rapid eviction from the gallery, so I wouldn't recommend it. Also, you'd miss the last and arguably the best bit (in my opinion) - stop at 'Landscape near Champrosay,' a Delacroix showing heavy foliage on trees in a countryside setting, before turning through ninety degrees to the next wall of paintings; a Cezanne river landscape and a Van Gogh of olive trees, and hear the light bulb click on, inside your head. The free brush-strokes, the blues and greens and the naturalistic painting of Impressionism were all born here. Delacroix, known as 'the tiger' because of his energy, powerful emotions and dazzling, often fiery early paintings, is the genius who led us to Monet's water lilies and Van Gogh's sunflowers.

I'm sorry if my art based ramble has rambled on too long. I guess what I am trying to say is that I enjoy being inspired and acknowledging that inspiration from others - those with the vision and skills to paint stories onto a canvas and those with the playful inventiveness and insight to create stories with words and to create new words when established ones are found lacking.

I am also trying to say that without the great painters and their understanding of light and colour the world would be a much duller (in more ways than one) place. Imagine a world in monochrome. Imagine a filtering out of shadow and the subtleties of lighting. Imagine never being able to see this 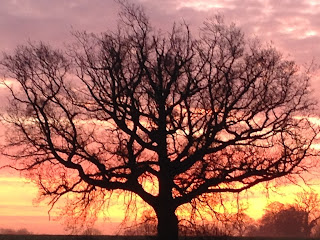 Or the colours in this 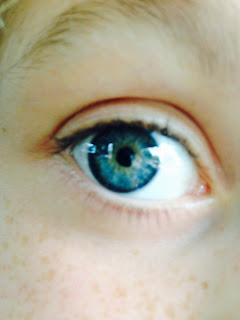 Imagine the art in galleries restricted to a limited range of greys and whites.

How boring. How uninspiring.

Enjoy colour and light.
Flochetage, bedazzle and woozle ... free yourself to play with words, too.
Be creative. Invent something.