Every single day (must get this earworm out of my head!) for about a week, I've woken with the disconcerting conviction that I've missed a date in the diary (easy since I have two, plus a family calendar and husbad has a virtual one plus another on the study pin-board, which is exactly too many to cross reference or update or do anything sensible with at all in the manner of streamlining the family timetables, events and holidays - thank heavens for dentists and doctors who now text a few days before appointments just to remind you that once upon a time you declared yourself available for ten minutes in two days time, which is just time enough to check all the diaries and confirm, with the 'OK' text as requested).

Or perhaps I have failed to keep a promise; have betrayed a secret; mislaid something important or left something plugged in.

Maybe it's that meeting at school last week that I didn't know about, so it wasn't on the calendar, so I didn't attend, because I hadn't looked at the school diary.

Probably it's another party invitation, fluttered at me while I was driving home from school, and now lying in the car's foot well with several other unreplied-to party invitations, making me the nightmare mother who never replies and has to be chased with embarrassing emails which try to be polite but you can tell are typed with fingers stiffened by the fury of having to chase the ungrateful and rude non-responder (me!)

I've tried building-up little-things-misplaced but my attempts at self-delusion have failed and presented with all the little-things-forgotten the feeling that they are eclipsed by the something more significant grows. Will the feeling pass? Or will I discover something truly dreadful? I guess I'll have to wait and see.

And talking about dear or deer ... Four-legged-friend and Bertie Baggins nearly caught one. I very nearly had to face the unpleasant question of what to do with a caught, chewed, broken and exceedingly frightened muntjac deer. The fencing in our garden is more rabbit and deer proof than of old - which is not difficult as the 'old' was in a fallen over state and had to be replaced in order to contain two give-us-a-chance-and-we'll-chase-every-passing-cyclist/tractor/runner/post-man/pedestrian-especially-pedestrians-being-walked-by-their-dogs dogs. But this has the now obvious disadvantage that once in the garden the muntjac deer is also contained. Muntjac deer can jump at a post and rail fence but not through the attached chicken-wire. They can't jump over the now erect fence. And they don't fit through the rabbit-sized holes in the wire. Had I previously got around to hacking out some thick bramble, the deer would have had nowhere to hide. Instead it dived into the prickles and the dogs suddenly became interested in the bread I had been telling them about for the past three minutes. Maybe 'yelling them about ' would be more accurate.

So the muntjac deer was grateful for my tardiness in the garden ... have I forgotten to do something there? No - not got round to it yet ... yes! Forgotten it ... not as far as I am aware.

In an attempt to be a little less garden-tardy, I have spent the weekend weeding i.e. rescuing plants from the chokers - grasses, buttercup and ground elder. If I pioneered the gardening of weeds in borders and it caught on, my garden pre-weeding would be quite a show-piece! 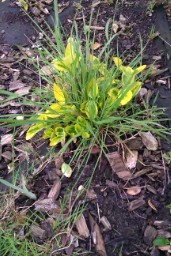 Four-legged-friend and Bertie Baggins have been gardening too - standing on the flower bed and sometimes entirely within the bushes; running off with the short hoe (it has a deliciously crunchy wooden handle) and stealing weeds out of the bucket. Evidently such gardening activity is so exhausting - or perhaps it's the unaccustomed heat of the sun when your winter coat can't decide if the weather of recent weeks is saying moult or thicken-up; or maybe it's the sleep of those stuffed to the brimming belly-full with weeds - that it renders these gardeners so prostrate that they looked like acting-dead extras in a shoot-em-quick movie. 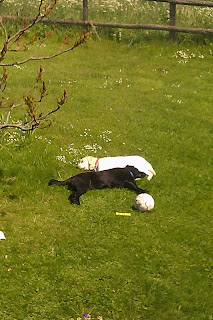