December 18, 2014
On Thursday 19th December 2013, I wrote and posted a blog titled Inner Sheep Dog. It was about skiing en famille. I wish to revisit all that I wrote then, only this time 'with bells on' as I now have an entire family of sheep to worry over and count in safe at the end of every day. Last year, I only had half a flock to round up. This year, the entire flock answered the call to disturb their sheep-dog-protector. 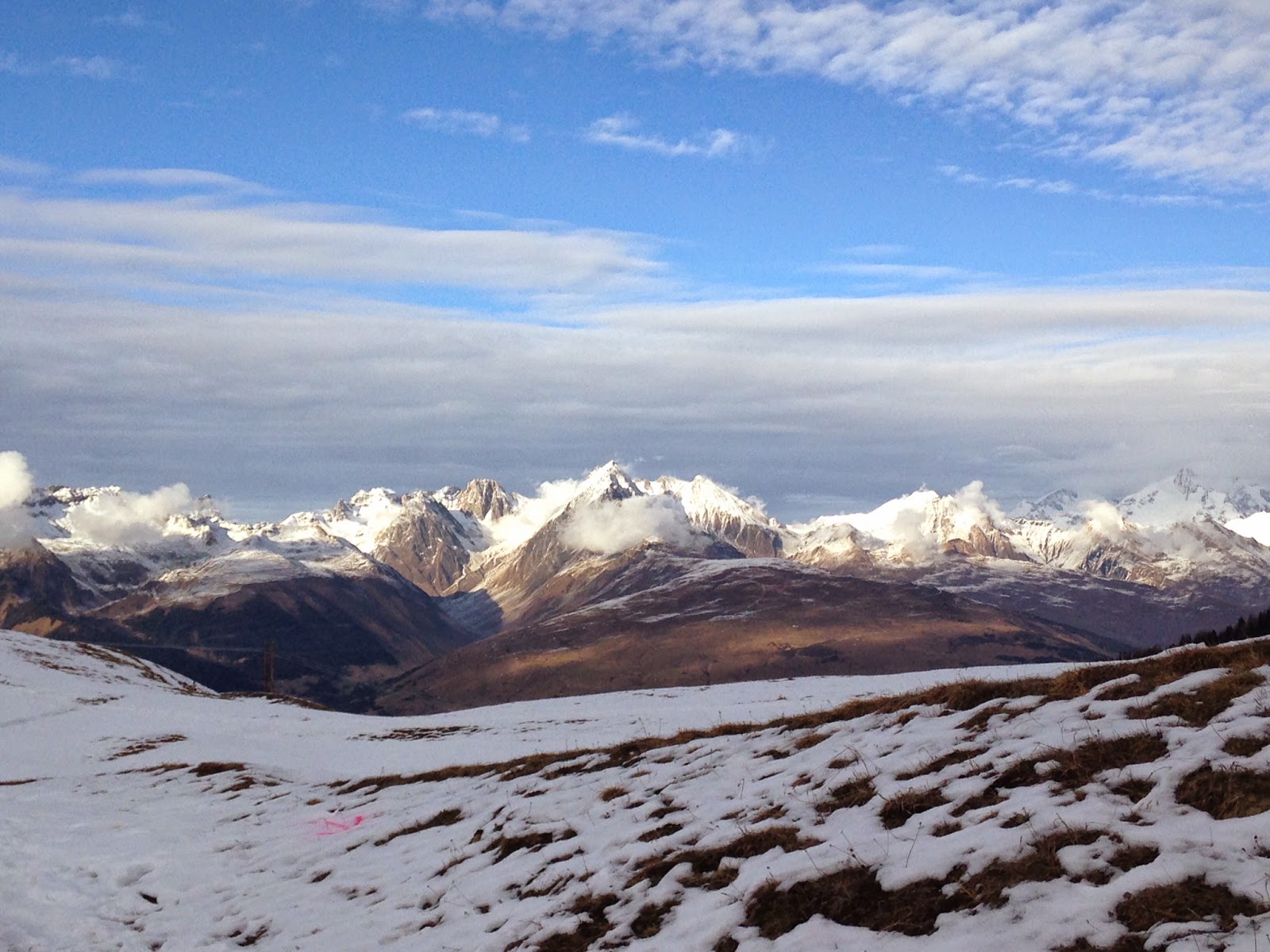 The mother of a friend recently described skiing as "that holiday when the best bit is the journey home." That is just so true. I couldn't have described it better myself. I can think of other activities that would stress my inner sheep dog more - bungee jumping and sky-diving spring to mind and if any of my flock ever think it's a good idea to base jump, I hope they never tell me - not even after the event.

I think the catastrophists who broadcast news of disasters both natural and man-made are largely to blame for the worry-fest that infects those of us with overactive imaginations. Tales of skiers wiped out by avalanches morph too easily into horror stories where the victims wear the faces of your little flock. You wake in the middle of the night, sweating and panicked. Haul yourself out of bed and tuck the duvet round their shoulders, not because they're cold, but because you want to touch them, feel their breathing, before you attempt to get back to sleep. Maybe, this is a form of OCD - one that specifically afflicts mothers. Over-protective mothers - yes, perhaps. But I'm pretty certain that it is mainly mothers, as the men I know, on the whole, don't appear to suffer in the same way. I'd like to suggest that is because men don't have the imagination to see the things that could go wrong. But that would be too sweeping a statement ... probably. Maybe men are better at talking to themselves with a stern, don't-be-so-irrational tone of inner voice. Or maybe they're men - the ancient hunting-gathering chieftains who can dig themselves out of anything. So they don't worry. They're invincible.

Like sons who want to learn how to snow-board.

Strapping two planks onto heavy, unwieldy, plastic buckets that clamp vice-like onto your calves and standing on a snow covered slope ... a steep slope! On a mountain! In the rain (today)! ... is mystifying enough, to anxious souls like me. Binding those buckets together on a wider plank, so that you can't move your legs is simply ridiculous. Surely! Unsurprisingly, the people who do snow-board are usually flat on their backs at the edge of the piste, like upturned beetles. Or sliding on their bellies head first, arms bent at elbows to make an ineffective snow plough that splatters snow overzealous-spritz-like into their faces and knees raised behind them with feet still clamped to the following board. Snow board artists aren't unaware of this - of course not! - they know that most boarders will fall, a lot, and a board bottom-up displays the artist's work for free. It's a truth generally observed that most boarders are youthful, attracted by the grafitti-splattered clothing and the belonging to a herd of like-minded thrill seekers - they have to be to have the energy to make windmills out of their arms and hop when not awkwardly scootering their boards, and they need to be able to bounce, frequently between the brief and probably exhilarating moments, when the theory comes together and they traverse from one side of the piste to the other, terrorising all the skiiers below them who freeze because they assume that the approaching roaring crunch is a boarder out of control. He usually is.


Last year I wrote about skiing slowly. Very, very slowly. My policy of better the safe and steady tortoise than the reckless hare has been replaced this year by better the restaurant-internet-seeking, blogging and happily book manuscript editing, coffee-drinking, hot-chocolate-supping time killer, happy to be wearing walking boots instead of calf pinching ski boots and happy to hear about minor mishaps rather than see them. It's the seeing that sparks nightmares. I stroke my inner-sheep-dog, quietly telling her it will be over soon and we'll all be safely on that coach on the way home. 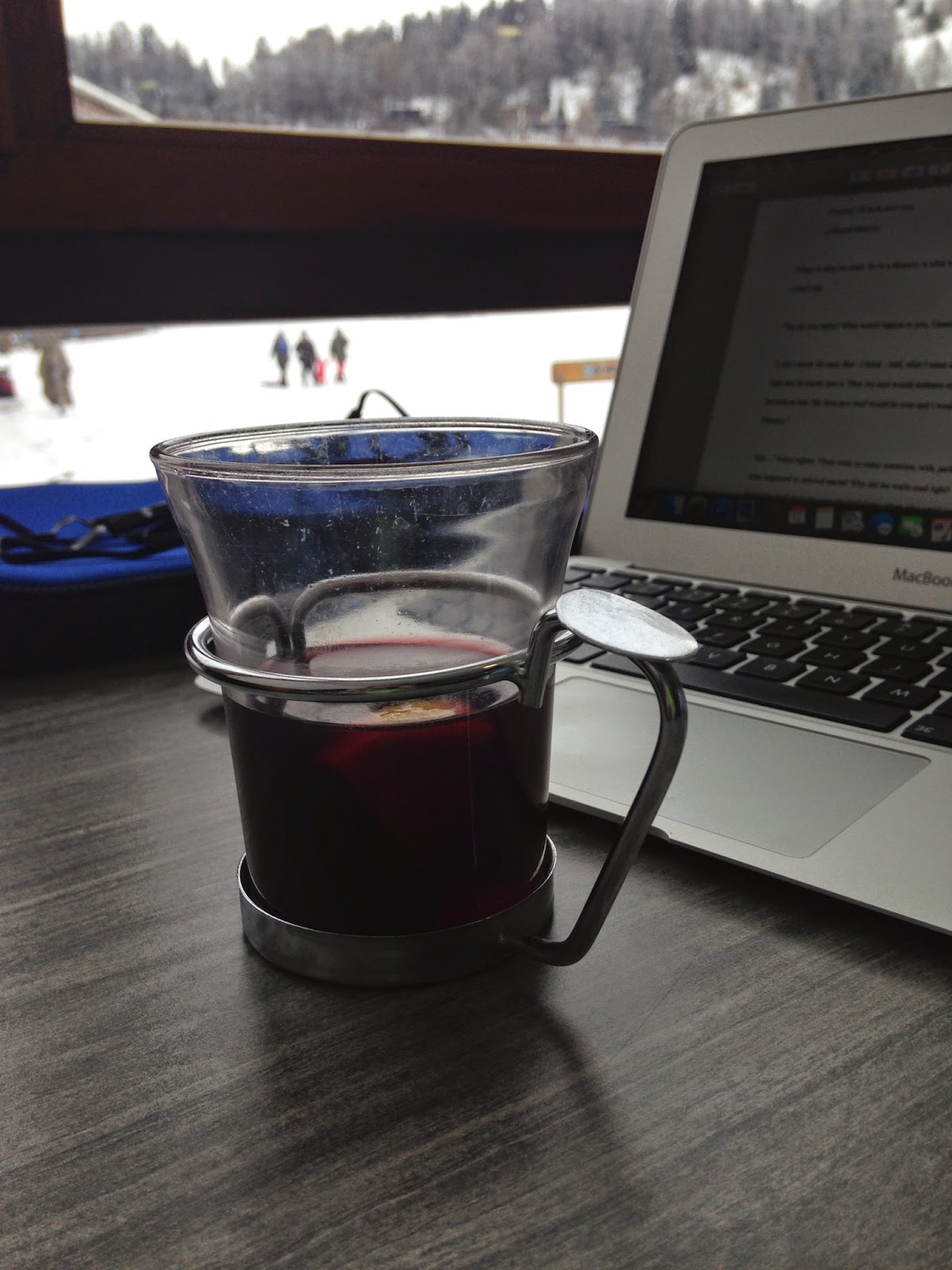 Oops ... okay, so it's not always hot chocolate or coffee. The occasional vin chaud slips in.