On cinnamon and happiness

May 15, 2015
Cinnamon - I know ... hmm - actually, I know not a lot about cinnamon. It sits on a shelf (labelled Cannelle, because I like my quirky, bought in France, spice jar) with its fellow (English bought) spices nutmeg and ginger, but where it, or indeed they, originally came from is a bit of a mystery. Nutmeg, comes from a roundish, knobbly nut. I know this because I have a tiny version of a cheese grater which is for grating nutmeg nuts (and fingers). Ginger comes from the root of a (I guess ...) ginger plant and cinnamon is from the bark of a tree (... perhaps?)

Brief intermission while I do some research -

Yes! Cinnamon is the bark of a tree, specifically the Cinnamomum tree and most of it comes from Sri Lanka. The bark is removed, dried and rolled into quills. These quills are cut into the cinnamon sticks that are the essence of Christmas and are ground into the fine powder that is used in everything from curries to apple crumble to mulled wine.

Discovering that my hunch regarding cinnamon and tree bark is correct is all very nice but the common culinary uses as listed above are all so very conventional. How about - drum roll, please - cinnamon wedges? As in potato wedges. Or sweet potato wedges, if you prefer. Try it - scrub the potatoes and cut into wedges (skin still on); toss in a mixture of melted butter and oil, add salt and ground pepper, and dust generously with cinnamon. Yes, really! Spread out on a shallow roasting tray and bake in a hot oven, tossing frequently to ensure even browning. You won't be disappointed. Thank you to Bar Le 5 a 7 Siete in Plagne Soleil for this recipe.

I love crumble - apple, rhubarb, plum or gooseberry - served with vanilla ice-cream or custard (depending on the time of year).
I tried banana and tropical fruits once - it turned into hot mush infused with the sickly smell of banana gloop (disconcertingly liquid amoxicillin-like) - which wasn't good.  'Don't do this again!' was hastily scribbled in my recipe book. And the assembled company of crumble-lovers was not happy.

What makes you happy?

Banana-pudding that smells of medicine? No, I didn't think so. But smells are powerful triggers of emotion.

When Littlest is 'feeling sad or "stressed" she goes to the larder and sniffs the cinnamon.' This apparently makes her happy again.

Singing works for her too. But not cello practice ...

What works for you?

For me, it's a dog lying at my feet.
Or on my feet - when I'm gardening. It's the wagging tail when I get home. And the vertical bouncing of Bertie Baggins when the most exciting two-legged friend in the world suddenly appears and not only that, but she's coming to release him from his run! 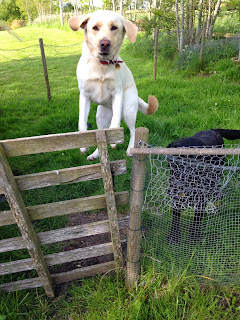 And it's walking the dogs. 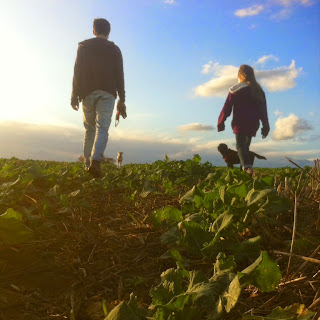 And it's my children.
And the sounds they make. Alone and together - the magic of music created out of silence and of laughter shared.

And it's friends. And sharing time with them.

And it's my orchids. 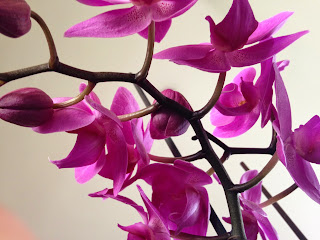 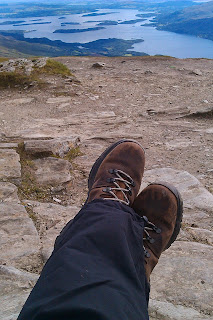 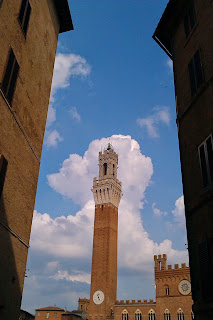 All of these things work for me. They make me smile. And, quite often, they make me cry.

What are your happiness triggers?

Cinnamon, dogs, children, friends, favourite places? A good glass of wine, chocolate, lemons, an afternoon spent cycling, riding your horse, a book, cheese, ice-cream, a joke, mountain climbing, macaroons, opera, painting, gliding, the first blossom on the apple tree - so many different things that reflect our differences: our unique abilities and interests encapsulated in the simple emotion of happiness.

Why does it matter? Why is it important to know the things that make us happy?

Because as Littlest has discovered, black moods sometimes creep up on us and we need a way to thwack them away.

I'm off to sniff some cinnamon. And pat the dogs.
Then I will put the kettle on. And smile.