When tiny is mighty: of house mice, field mice and men.

Tiny can completely fill a room or indeed the whole upper floor of a house. Or as those with fully-functioning nostrils might say, tiny can fill an entire house. Which might suggest that my definition of tiny is somehow ironic, or tongue in cheek, or heaped with sarcasm. No - the mouse was tiny. In the dictionary compliant meaning of the word. What wasn't tiny was the smell made by the tiny dead animal. The smell was immense. So mighty that Littlest ran screaming from her room. So all pervading that Littlest had to change out of her clean pyjamas that had clothed her for the five minutes during which we hunted her room for the source of the smell. Her sister tweeted about it, Littlest cried, then sprayed the room liberally with every squirty substance she could find - mainly deodorant.
I never thought I would be grateful to suffer from sinusitis but in my role as chief pest-control officer, I didn't smell a thing.
The tiny mouse had found a frog stuffed with dried seeds - a beanie frog - and thinking it had found the abundant larder of mouse heaven had crawled inside, gorged itself until it fell asleep, started to digest the stomach full of seeds and - unfortunately, there's no nice way of putting this - exploded. I  hope the explosion was swift. The agony does make me pity the tiny greedy mouse.  Surely gut bursting is a rather extreme punishment for greed. The mouse's eyes were definitely bigger than its tiny stomach. What a horrible, horrible way to go. For the same reason, don't ever give your dogs dried rice to eat - if you do, they, like the mouse, will explode.

Unfortunately, many more tiny trespassing creatures have declared their residence in our home. OUR home - where we use the bathrooms for our personal waste disposal, but where the mice go wherever they happen to find themselves at the moment when they feel the need to go. Hence little brown droppings everywhere. And so far no interest whatsoever in the peanut butter baiting in all the traps.

We need a cat.

Or plug-in ultrasound emitting mouse and rat deterrents - do they work?

Or many more grain filled beanie toys - no, on second thoughts ... just no! Demise by expanding grain is too cruel.

Maybe it's the mild winter, maybe it's the presence on the landing of beanie toys turfed out of cupboards as children growing-up purge their childhood from their rooms, maybe it's the cumulative effect of years without a cat or maybe it's the warm, food-filled, predator-devoid prime example of mouse real-estate that we have created, which has caused the invasion of OUR space.

Are house mice the same species as garden mice? I think not. In my head, they are not the same. I am happy to share the garden to a point just short of sharing my strawberry crop. But not the house. The house belongs to us. And several thousand wood lice.
The garden belongs to me, the birds - mainly black birds, pigeons and blue-tits at present - rabbits, moles, woodpeckers (yes, I know they're birds too), occasional pheasants (ok, more birds) who forget we have dogs, a rare visiting fox, and Four-legged-friend and Bertie-Baggins.


And this little chap 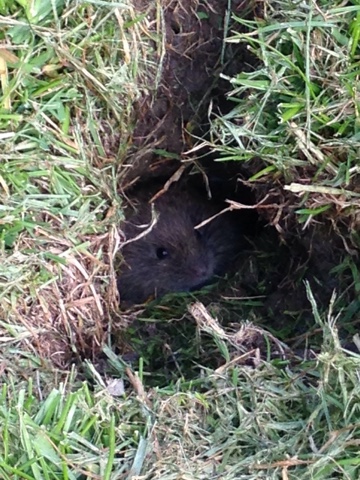 I can't decide which picture I prefer, so you get them both 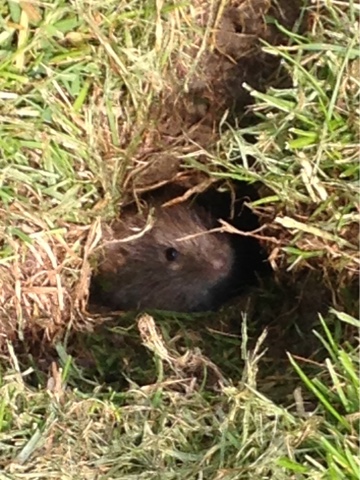 Bertie Baggins was interested but I'm guessing was fully aware of the futility of trying to catch the mouse - all that wasted energy for a not very satisfying morsel. A bit like his attitude towards rabbits. And pheasants. The prey always panic when they see Bertie-Baggins or Four-Legged-Friend and don't hang around long enough to notice that they are content to hang around watching them run away rather than give hungry chase. Little do the prey know that it's far easier to wait for your dinner to be scooped into a bowl than chase it up the garden. 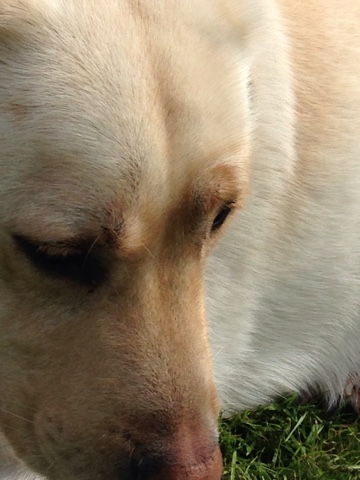 until his eyes became so heavy that he had no option but to sleep in the sun. 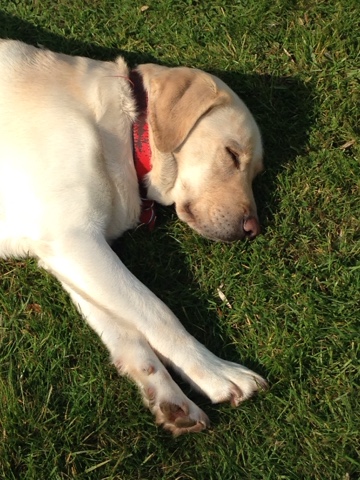