June 26, 2016
Beware of ranting ahead. Sometimes something just has to be said. 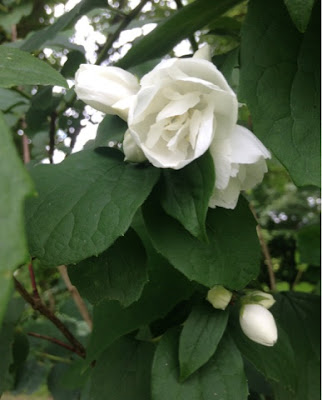 The mock orange -  a handsome, richly scented, majestic garden shrub, topped with a prolific exuberance of frothing white hair ... oops! ... flowers, that misleads with aplomb, pretending to be something that it isn't, as it masquerades as an orange.
From gardening to referendum in one giant mocking leap. For anyone who knows me, this will come as a surprise, as I am not known for my political prowess or astute deliberation on current affairs. However, in the light of current circumstances and because it is perhaps, sadly, unlikely that Ruth Alexander and Andrea Leadsome will pull together a united bid to beat Boris - I propose the establishment of a new political 'party'.

There! Surprised? Indeed; perhaps, surprised that I know who Ruth and Andrea are.
Okay, so you know I'm not serious. But ... indulge me. There will be a point to this. For a moment assume that at the birth of this resolutely, because-anything-I-invent-will-be-trite-and-incite-much-laughter, nameless party, I have a measurable mass of support. Now, let's see how quickly I can lose it.

First - until we stop hating each other, this is never going to become a great country again. I am against the haters. Oh dear - my party is haemorrhaging supporters already. Watch them jump ship. Off they go. Too rude to shut the door behind them. Off to incite a demonstration somewhere; outside a school, perhaps. Good riddance! I am ashamed that people who claim the same nationality as me, jeer refugee children on the streets of France; print leaflets to tell Poles to go home and make death threats against politicians. I am ashamed that it still makes headlines that a politician has "outed herself" - why is this news? It is normal. Whether a politician is gay, or that horrible, heavily loaded-with-judgement word 'straight', should be no more important than whether or not she has a freckle behind her right ear. What matters is whether or not she is a good politician. My party would let everyone be who they want to be. And would accept them for who they are. It would of course, be colour-blind, age-blind and ability-blind, too.

Second - actually there isn't a second. It's all about the first. Read it again.

Third - ditto the second. I hope I have some supporters left. I really hope I do.

I don't believe in anything. Other than that if you dig deep enough there is a central core to all of humanity that is good. I also believe that it is fine for others to think I am wrong. But not for them to mock me. For I won't mock them. I am afraid though that I might be standing in a pretty lonely place when I take this stance. And that racism, extremist nationalism and disillusion with the establishment, have united to awaken a sleeping giant that could blow our country and Europe apart.

So, back to my proposed party and my mission statement: 'Accept others for who they are. Stop labelling people. Stop hating each other.'
We need to join together, not rip ourselves apart. Far from the outward-looking, proud, liberal, free-spending nation as promised by Big Fibbers to voters who were too eager to dream of a promised, independent land, the referendum result has forced to the surface a bubbling, angry, over-full, deeply-shaming and inward-looking basket of phobias and hatred.

But on the 23rd June 2016 democracy spoke.
Democracy elected to leave.
The Big thing to do now is to unite and get the job done. We need to be big girls and big boys and stop the bullying and name-calling. We desperately need some statesmanship; a firm hand on the tiller of our little island steering it, if not entirely out of Europe then, perhaps, instead into a more comfortable, post-Brexit, Norway-like agreement. Where we can pause and breathe and try to mend some bridges.
My political party would be one forcing the protagonists of this mess together - sit them all down; serve them lots of tea; feed them cake and biscuits ... Oh! That sort of party! Yes - what sort of party did you think I meant? ... And, until everything is sorted out, don't let anyone leave (other than those refusing to put hatred behind them, who would be forcefully ejected. Via trebuchet - straight into the English Channel).

There could be a great future ahead. But only if we come together to earn the word great.


Phew! Rant over and I'm going outside, into the post-Brexit rain, to prune my mock orange.

Prune: definition - to remove unwanted or superfluous parts. Why am I thinking 'Boris'?

If you want to read a sensible take on all of this, written by someone who really does know what he is talking about, find it here my-two-cents-on-the-eu-referendum