Confetti for the brain. A little bit of history regarding a use for holes and a couple of quotes.

May 08, 2018
Confetti - noun: small pieces of coloured paper thrown over a bride and groom following their marriage ceremony. Also the bane of church yards and wedding venues - who wants to exit church after their favourite spinster aunt's funeral and slip on the papier mâché mush of last weekend's weddings, or step, in your wedding gown, onto a pink spattered step when your colour theme is lilac? 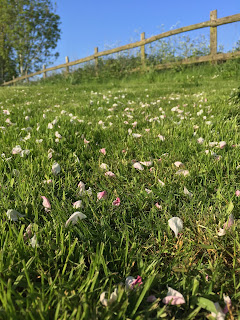 The garden, footpaths, and pavements are covered in blossom snow. And, when he falls asleep beneath the apple tree, it speckles Four-legged-friend's black coat. 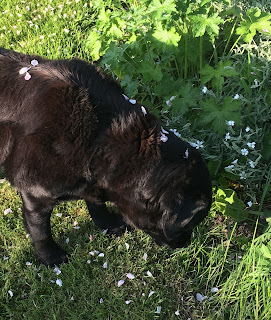 The confetti we know today - bits of bio-degradable (church and venue friendly) coloured paper or flower petals or died flowers - replaced the seeds or rice which were showered over the happy couple in the past. These were thrown as a blessing and sign of fertility but like hail-stones, rice and seeds hurt and pricked the skin. I guess the seeds presented another, longer lasting headache to those charged with overseeing the upkeep of church yard gardens. I guess also that which seeds were chosen might conceal a hidden message for the wedded couple - lily seeds, harbingers of funerals; blackthorn of impending death; orchids for love, friendship and fertility; morning glory for peace and happiness. You could get quite schemingly and secretly poetic with your intended message and no one would know until months later.

The first paper confetti was produced in Milan, in 1875; the invention of a textile manufacturer, called Enrico Manglini. He produced silk and housed his silk worms in hole-y paper. Being an inventive type and one to seize an opportunity to avoid waste, he looked around for something to do with the bits of hole and noticed that the discs of paper - the holes - created a snow-storm when thrown into the air. Why did he throw them? Perhaps, at first, he didn't; perhaps he observed his factory workers throwing the holes from the prepared paper sheets of hole-y silk-worm-hotels. This snow-storm became the confetti that replaced the sugared coriander seeds or coriandoli that had, prior to Manglini's papery snow, been thrown at performers in the Milan carnival. I should think they were very grateful to him. Bits of paper wriggling down between you and your clothes would be far less uncomfortable and less sticky, than sharp coriander seeds and less likely to attract mice to you discarded clothing.

Confetti as metaphor: I was discussing books at the weekend and described my teenage reading of John Buchan as confetti for the brain. I know - I'm not entirely sure what I meant either. Something along the lines of trifling, entertaining, unchallenging, enjoyable, inspiring and unthreatening - a pleasant stroll through bright and lightly literary fare.
My brain confetti was swiftly drenched as I leapt from Buchan to Tolstoy and Turganev and Nabokov and found their Russians too serious for paper holes.

Confetti is fun. It is beautiful and imbued with love and happiness. And it gives inspiration to others:

Ray Bradbury said 'I'm interested in having fun with ideas, throwing them up in the air like confetti and then running under them.'

John Updike (much rearranged and condensed) wrote 'to distribute ... one's memories and fantasies ... as ... dark marks on paper ... as a kind of confetti shower falling upon the heads and shoulders of mankind ... is surely a great privilege.'

Confetti - topical: will Meghan and Harry have some; what will it be (I'm guessing petals ... or, if they're feeling mischievous, bubbles)

Confetti - topical: the trees are full of it

Showers of butterflies can also mimic confetti; even one dances lightly through the air, floating much like a disc of paper before flitting back to a flower 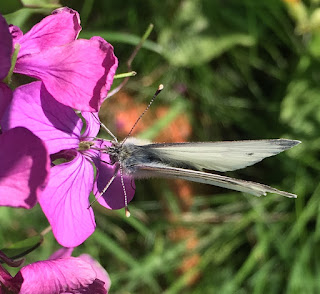