Constants - those rooting things that never change. Those things that we depend upon. That ground us firmly in who and where we are. The things that if removed would be replaced by chaos.

When I was thinking about what to write,  I clumsily started to input c-o-n- into my phone and up popped the suggestion 'consonants.'

Consonant - definition: any speech sound that is produced by stopping the air flowing freely through your mouth - 'f', 't', 'z', 'm' ... etc, and also any written letter that is not a vowel.

By substituting the t in constant with the on in consonant my phone unwittingly suggested something that at first glance might appear to be constant but is not. Language evolves and changes - even its letters; its building bricks. Not all of the vowels and consonants we take for granted today are the same as the ones known, for example, by Shakespeare. If we go further back in the history of the English language, to Chaucer, they are different still and almost unrecognisable - paleys (palace); lyche (like); hir (their); and my favourite, sodeynly (suddenly).

In 1476, the many different and coexistent dialects; words borrowed through invasion and trade from multiple languages; a dominance of Latin among scholars, churches and merchants; and no consensus at all, in how to spell, led to a logistical headache for William Caxton, when he brought Gutenberg's printing techniques to England and started his own printing press. Apparently, there was no european type-set available for the commonly used sound made at the beginning of 'the', so Caxton substituted a 'y'. We all recognise 'ye' as 'the' because our villages are filled with 'Ye Olde' bakeries and tea rooms and public houses. But every time we say 'yee' we should of course be saying 'the'!

Another obvious difference in the English of the past was the use of 'f ' where we now use an 's' in the middle of words, as in perfon and eafily and Shakefpeare. Look at the first three lines of the original folio for 'The Tragedie of Hamlet Prince of Denmarke' - it's very different (... centuries different) from our modern use of consonants -

... note the f for s; e at the end of words where we no longer need an e; and a muddle of u and v substitutions. Memorably, the f and s switch is still seen in some old Bibles and led Alice Tinker, of Vicar of Dibley fame, to stumble through a reading, 'Ye are the falt of the earth and fainted. God shall feal your endeavours until ye fit on his right hand. Therefore fight the good fight, for his ... fake, and he shall be thy fu...' (succour!)

I'm about to contradict myself. Forget what I said about language evolving and not being constant and instead, think of the building bricks we use today. Could we manage without them? What would happen if they were removed?

So, when the vowels are dropped, there is no descent into complete linguistic chaos.
But what happens when the consonants are removed -

I have somehow managed to argue that the place of consonants in language is both inconstant and constant. A circuitous procrasti-ramble triggered by a simple texting mistake on my phone. But one that nudged me into a very pleasant hour reading Chaucer and discovering that Shakespeare or Shakespere or Shakespear or Shakspere or Shake-speare couldn't spell.

Back briefly to constants and specifically, sunrises 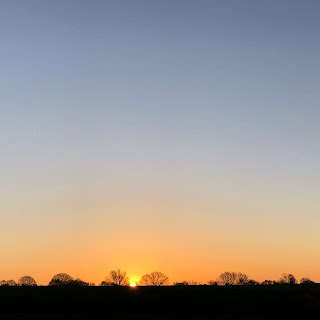 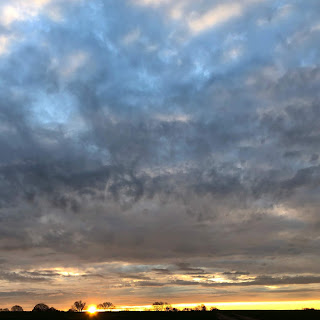 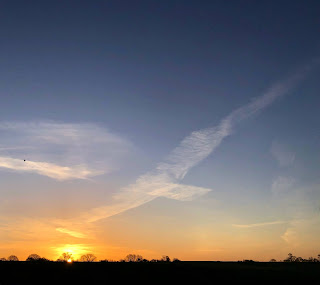 See @herbiecax on Instagram for their accompanying quotes. But this quote - from Louis MacNeice -applies to all sunrises


We cannot cage the minute but we can witness sunlight every day. The sun is the recurring constant; the big one. It and the moon never change.
If we ground ourselves in this - pause for a moment; breathe - if we anchor ourselves on the constants, like the sun that will always rise, the world no longer appears so out of control.
All the constants have not been removed and what looks like chaos, is not.


Tonight, in the chilly air and evening sunlight, I waited with these friends for the moon ... all they wanted was the bread in my hand 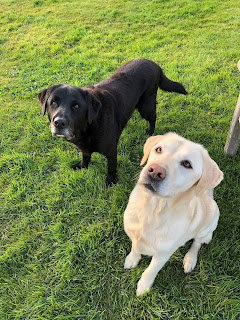 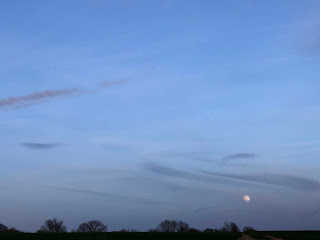 May 14, 2020
You know that lazy afternoon feeling - sitting on a hillside/beach/boat/at a table on the pavement outside a cafe/bar - mug/glass of something hot/chilled in your hand - clouds slowly sliding across a blue sky - a gentle zephyr of a breeze dancing through your hair - and nothing to do but sit and stare? That feeling when your thoughts succumb to day-dreams and your eyes close and real dreams start to unroll inside your head.  Has anyone else noticed that social isolation has a similar effect - all-be-it one laden with anxiety and punctuated - like big fat rain drops tumbling out of the sky - with frustration? The lazy afternoon bliss of holiday freedom replaced by the lazy afternoon en-trappment of a global pandemic, but both tipping us into our dreams. So, this becomes another day for dreaming. Like yesterday. And the day before. And then for dreaming about dreaming. And perhaps for asking, 'What is a dream?'
Dream - definition: noun - a fantasy of the imagination occurring …
Post a comment
Read more