Why am I so flipping frightened? Through procrastination and beyond.

I procrastinate ALL THE TIME. Well, not right now obviously ... but for much of the time my head is stuck somewhere between the latest pile of laundry, a dahlia that needs potting on, four legged friends that need to be fed/walked/loved and the many things that I really need to do, that I want to do and that I should put on a list. Most days I remember the non-existence of said list in the evening, when there is dinner to cook and no time left in the day to embark on finding a new me; a me that makes lists. I do, however ... sometimes ... write a hello-morning-this-is-going-to-be-a-super-organised-day list. And the outcome, on those list days is either head-on-the-desk despair at how little I managed to tick off, or the miracle of a vaguely successful day. Vaguely, as my gauge for 'successful' is achieving slightly more than fifty percent on the tick list. And therein lies the problem - I procrastinate and thus greater than fifty percent becomes impossible. Even fifty percent is nearly impossible and if I'm honest sometimes requires cheating i.e. the addition of things like 'eating lunch' and 'feed the dogs' which I would do anyway. Recently, I started a bullet journal and so far at the top of my aims for each month in 2021 has been 'do better than last month!'

So why do we - I know I'm not alone - procrastinate?

In the world of procrastination, we humans fall into two groups - those who procrastinate and those who don't (it's not as simple as this, but a simple dichotomy aids the explanation). There are the lucky, driven and highly focused folk who are wired to get on with things - give them a job and their brains immediately start to stategise, plan and generally enact a call to action, which they then work through and complete, readying themselves for the next task. They are the sort of people you want to delegate to; eager, driven, rather exhausting, and sitting somewhere between mildly and extremely irritating. They are the non-procrastinators.

In stark contrast, procrastinators tell themselves they don't know where to start. So they don't start. But they make themselves very busy doing everything but start. They are perennially glass half empty - so empty that the glass has sprung a leak. Why? The answer is fear. Hmmm ... I hear your scepticism, but yes, the answer is fear.

Fear does funny things to our brains.

On the one hand, there is the extreme fear triggered by something acutely threatening and sudden. This explodes in a flood of fight and flight chemicals inside our nervous systems, priming us to be ready to take whatever action is needed to survive. It obliterates all other thoughts, blinkering us to anything other than the neon warning lights screaming FIGHT or ESCAPE inside our heads.

At the other end of the spectrum, is the joy-corroding fear that calls itself anxiety. The anxious brain can't settle; it catastrophises; it worries so much about everything that it can't concentrate; its motivation shrinks and retreats into some dark recess of the mind; it struggles to hold onto hope and loses the ability to sleep. Anxiety is a truly dreadful manifestation of fear.

The fear of failure is a fear that those who procrastinate have learnt. Something in their past has made them fearful. And has probably been repeated and reinforced. I, for example, have the fear of not being good enough. I fear that I won't succeed in the thing that is my dream. I have imposter syndrome. And every time in my life when someone else was better - often judged by me to be better - I have learnt that I am not best, and that there is something about me that is wanting. I have build layers of learnt fears that stand as an impregnable wall between me and the thing I want and it's a wall that I avoid climbing because I don't think I am able to get over its top. And I will do everything to avoid the disappointment of confirming that my fears are right.

Life is full of knock-backs but some people appear more able to ignore them and press on, regarding them as challenges, rather than proof that they're actually, as they thought all along, not very able. If you are a procrastinator you will know EXACTLY what I am getting at. If not, you'll be rolling your eyes by now and thinking 'what an introspective, delusional and self-pitying ninny!'

But if the good news is that procrastination is learnt, the hard news is that it can be unlearnt - I can already hear alarm bells in my head ringing out telling me that my imposter syndrome is real ... I can't ... I won't .... I'm not able to .....

Apparently, procrastinating ninnies can learn to change, if they want to. Think about what you gain from being a procrastinator - frustration, disorganisation, never having the right sauce (mint) for the right meal (lamb), packets of seeds arriving in the post that duplicate the ones you bought last week, many, many 'to do' piles of things and never enough time for two four-legged-friends who just want to walk and play and eat treats and sit near me when I garden - 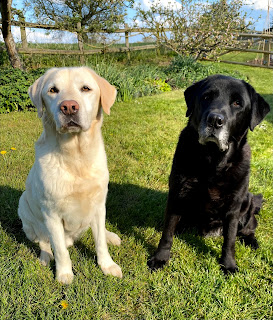 What the procrastinator needs to learn, according to research by neuroscientists and psychologists, is to tackle their fear by changing their behaviour. Typically, procrastination is doing lots of other things so that you don't have to do the one thing that you need to do. It is repeatedly putting off til tomorrow; busying yourself with trivial things; and making excuses which you know are just the lies that you tell yourself because you are too afraid to do the thing that is still there, that hasn't gone away and never will ... unless you do it!

... well - and here's the bad news and the bit that I'm still struggling to convince myself - we will never learn whether we are good enough, unless we suppress our fear and try. And trying means trying and trying and trying again. And unlearning the tummy-tightening fear that has always prevented us from trying.

If we start with small steps, we can learn how to stop procrastinating. How?

First, we need to be kind to ourselves, recognise our fears for what they are, and find ways of dismantling them. Mindfulness is a good place to start. For me, I choose walking - mindful walking if you like - because nature nurtures a less stressed mind and less stress means more creativity.

Next, we do need to think about a routine but not be hard on ourselves - it should be flexible and fit with our lives. It should be achievable (without cheating!) and fun. Break down your chores into small chunks. Reward yourself with little things and smile more with every small goal achieved.

Finally, tackle face-on the thing you fear, and do it. Just do it. Get on with it. Take lots of regular breaks, and pace yourself. Simply doing it will make you feel better. And that feeling better is magic. It fills your brain with delicious tiny sparks of maybe ... maybe you can. Maybe you will. Maybe is intoxicating. It will improve your self esteem. And your focus. You will start to believe all the maybes. You will be trying. And as Roosevelt said, "It is hard to fail but worse having never tried to succeed."

How will you judge your success? By noticing that you procrastinate less.

How will I judge mine? Let's see how long the gap is between this blog and the next ...