January 02, 2012
Think I rather rashly said something about the fruit cage and sorting it out, in my list of possible, but not confirmed, New Year resolutions. 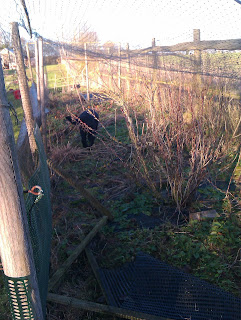 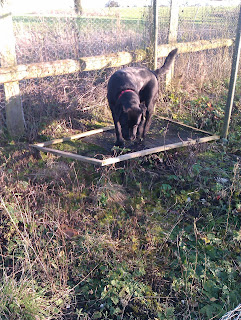 Four-legged-friend and I thought we had better assess the damage and the extent of labour required - or, as you have probably guessed, it was me staring distressed at the enormous amount of work needed and Four-legged-friend coming along for the walk. And to see if there was anything he could eat: dead rhubarb was a hit! 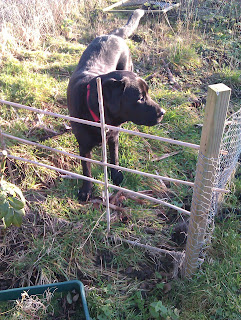 Rather than start immediately, I decided that a period of reflection and planning was essential i.e. I was distracted by an entirely different, and far simpler task. Much easier option; easier to execute and easier to complete. Weeding! 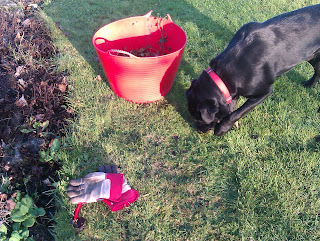 Four-legged-friend did his best to help. Ate a few weeds. Dug a hole. Stood between me and my bucket. Dropped ball on my toes. Tried to wrestle glove off my hand. Normal behaviour really. Then it struck me - could I persuade the felonious kleptosquaters out of the house and into the garden, where instead of helping themselves to pairs of scissors, car keys and boxes of matches they could instead steal weeds?!!!!! Maybe, I could tempt them with odd socks draped across particularly overgrown shrubs. Then it struck me - they are, of course, outside already. How else to explain the loss of trowels, secateurs, even spades? And the loppers - where have they gone? And who but the kleptosquaters would hide a half finished cup of coffee - complete with thick layer of green slime - on an upturned bucket next to the garden steps?

It reminds me of the elusive coffee cup inside the house. Every day, I make a cup of coffee and start the housework - sorting the washing; then the phone rings and when I've finished talking, I go back to ... the washing up. Just when the sink is full of soapy water, Littlest asks me for a snack - "elevenses" - and when the banana is sliced and chocolate milk poured, I go back to ... washing the utility room floor. I've almost finished, when Four-legged-friend clatters his nose into the dishwasher that I've left open. Four-legged-friend marched outside and dishwasher re-stacked, I return to ... making the beds and vacuuming the floors. Then, I hear someone trying to come in the back door, finding it blocked and pushing harder. And the clatter of mop and splash of water as the bucket I had left there is upturned all over the floor. Then, someone empties coffee grounds into my clean but now cold sink and the phone rings and I have no idea where I left the hands free phone earlier. I trip over the vacuum cleaner lead on my way to the washing machine, where I find both phone ... and cold cup of coffee.

Me or felonious kleptosquaters? - mmm, I wonder ...


P.S. If felonious kleptosquaters puzzle you, you will just have to read my previous blogs to find out who they are/might be.