The "What-is-a-condom?" place, a trip to the North Atlantic and abandoning children in Foreign climes

July 21, 2012
Son, who is currently running a hotel for his friends, might recall a visit several years ago to a French restaurant, where seated at a round table, set with wine glasses, fluted, linen napkins and immaculate table cloth, he announced to the dimly candle-lit room, in an unfortunately clear, resonant, high-pitched voice, "What is a condom?"

He was probably seven years old.


We ate at the same restaurant last night – same table settings, same atmospheric lighting, same owner whose gentle politeness is unchanged, but whose English is better (or maybe our French is worse) – this time ‘sans enfants’ to mark our wedding anniversary. The food “with zee sauces made by my ‘usband” was unchanged in its fabulousness: I do not like tuna, but the unordered hors-d'oeuvre of triangles of thin toast and shot-glasses half filled with a rich tuna paste topped with a cream sauce and chives, was utterly amazing. This was followed by a hot millefeuille filled with a melting slice of foie gras (something else I don’t normally like) and tiny, mild, woody-tasting mushrooms; veal (I know ... deeply unethical meal so far, but when in France ...); and as though this was not good enough already, the desert – with alarming table firework – was absolutely wonderful – crisp curls of dark, bitter chocolate hugging soft, creamy ganache and sitting in a pool of orange sauce decorated with delicately drawn feathers of raspberry juice. Mmmm ... wish I’d photographed it.

Today, chased a flotilla of small ships round from Brest to Douarnenez and lost - in fact, missed them completely, partly owing to the mist and general fogginess making distant views a blurred impression of sails at best and our tardiness and the failure of our trip advisor to suggest getting to viewing points early enough to fit into the car parks ... however, we managed to have a good walk 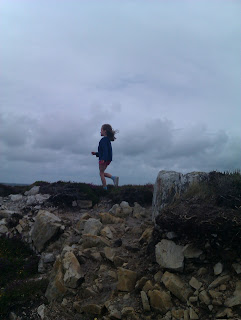 "This place smells of my headmistress!" - wild purple heather, sea breeze and yellow-flowering gorse, so probably a compliment!!! 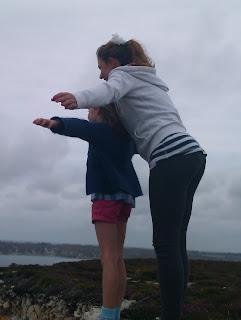 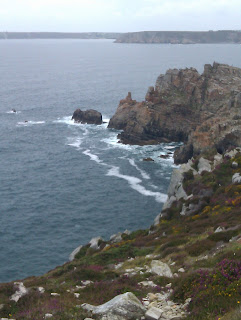 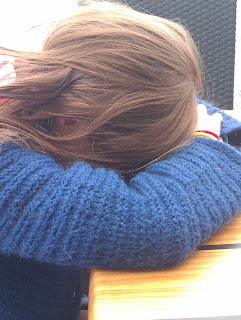 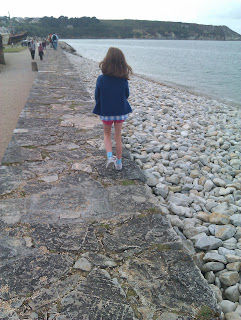 Time for another walk ... 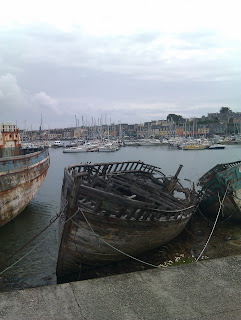 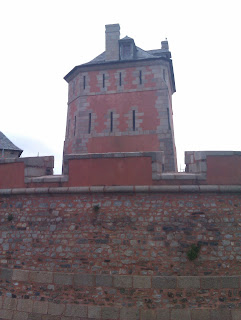 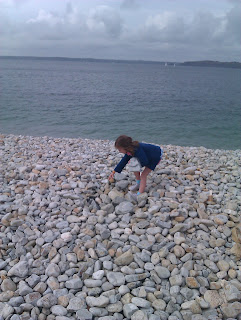 For supper, we visited a delightful French family we had never met before ... ate fantastic food ... and left a child with them for a fortnight to improve her French.