April 28, 2013
What is round; rainbow coloured; floats out of Littlest's hand; runs away in a bobbing, up and down, teasing manner; can be chased; and is most unsatisfying and unwholesome when eaten? 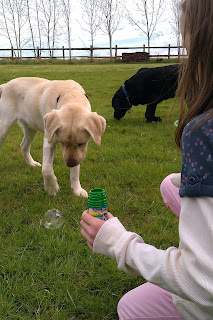 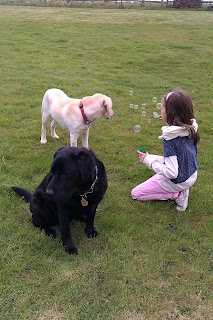 These pictures were taken shortly before Bertie Baggins and Four-legged-friend discovered an unopened bag of dog food in the garage. And opened it.
Of course.
And being Labradors with absolutely no idea of when enough is enough, they ate and ate. And gorged themselves on dry dog biscuits, which are now expanding in their tummies, making them thirstier than normal and rendering them prostrate on the floor in a stretched-out, tummy-hurting, bloated and drunk-with-food sleepy state.

They are not even interested in the roast dinner! 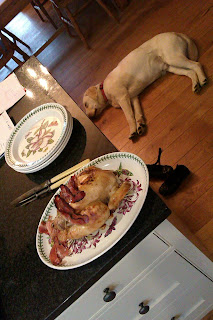 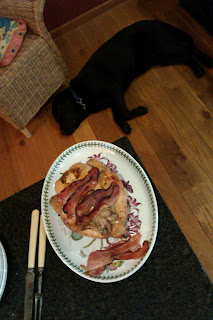 I'd be deluding myself - wouldn't I - if I thought they might learn from their greed? I must resolve to be a better dog mummy and ensure the transit time for sacks of dog food from car boot to utility room cupboard must be shorter and not include an unattended sojourn at dog nose level.

Best thing to do with overripe bananas? - Make banana bread. I am sure there are lots of alternatives, banana ice cream is pretty good, banoffee pie fairly spectacular but banana bread, especially one with rum-soaked sultanas is hard to beat. Unbeatable in fact! First rule is to follow a tried and much-trusted recipe (I first made this in 2002 according to my scribble down the side of the page). 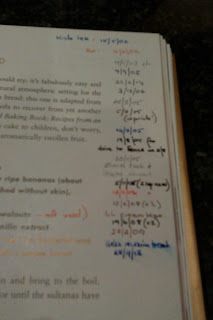 'Tried' as in many times before and 'trusted' as in hasn't gone wrong yet ... which where cake baking is involved, in my house, with an oven of unpredictable temperature, has to be acknowledged as the mark of a pretty fantastic recipe. I am not sure if I can say here who the recipe is by, or in which of my legion of cook books it appears - suffice to say that the lady in question tweeted about the coffee version of her banana bread recently. Try it, if you can find it. Enjoy! 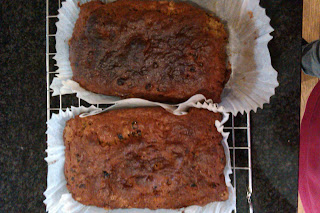 I may be breaking even more rules with what follows but ... assuming you find her recipe and if you require it to be gluten free (which we do), simply substitute gluten free flour, add a teaspoon of xanthum gum (helps to bind the GF flour) and try using soft brown sugar - the result will be a banana bread that tastes of banana toffee. Wonderful! We had it for Sunday pudding with vanilla ice cream and strawberries. Mmmm!

Just in case anyone is concerned, both dogs appear to be fine. Happily snoring. Paws twitching ... probably remembering the excitement of ripping into plastic and being rewarded with lots of crunchy biscuits ...