On appreciating art. Or not.

October 27, 2013
That Art comes in a myriad of shapes, forms and function is a commonly accepted fact. That what I consider art might be regarded by others as meaningless junk, ripe for trashing, is another. So how do we define art? What is it? And what is it for?

From our early Cro-Magnon ancestors who first painted on the wall of a cave in Lascaux, to the designer of complex computer generated images, people have produced works that some have called art. Art has a cultural, historical, geographical and spiritual past. At its best it transcends all of these. It can pull us together. Or push us apart.

What follows is about last Friday: a day when art wasn't got, then later - via some giant bubbles, a spire of glass and an evening of joyful music -  it suddenly was.

In the Times that morning, was a picture of  a Picasso soon due at auction where it is expected to fetch $1million. I showed the picture to Littlest and asked her to guess how much it might be worth.

"A lot," she replied, sighing as she barely looked up from her drawing. (She knows me too well and the type of teasing question I all too frequently - obviously - employ.)

"What if I told you it's probably worth a million dollars? Because it's by Picasso."

She studied the picture for a long, frowning, five seconds. "Who's he?" she exclaimed.


Just as well then that we were London-bound and planned to spend the afternoon in Tate Modern.


I love art galleries. They are a combination of all that is good about the hush of libraries; the colour, smell and light of a crisp Autumn walk at sunset; the squeeze in a child's hug; the brain kaleidoscope of reading a poem; the thrill of seeing an actor excel; the shiver of immersion in stirring music, and the delight in appreciating something that momentarily makes your soul sing.

But not everyone loves art galleries. Although, a bit of planning - go straight to level 3 and experience the less weird that Tate Modern has to offer, put food inside tummies, promise more food later and a sublime evening to look forward to - helps.
Tackling the issue of the discrepancy in age of those-who-might-not-normally-choose-an-art-gallery-as-afternoon-entertainment is trickier. Littlest was happy to briskly look, and to be cajoled back to look at things she might have missed - like the Picasso's. The elder reluctant gallery visitor was less willing to be brisk, except when it came to making judgements - the Rothko's were an early "I just don't get it" and "the bad holiday snaps" in another room provoked an incredulity that anyone pays for modern art let alone applies for grants to do so.

But the coffee was good. And the cakes. After which the elder reluctant gallery visitor decided that the Turner "would look good in our kitchen" and Monet's water-lillies were beautiful, if a "bit big." When we set off again, Littlest, forced to intersperse briskness with waiting, commented that it is strange how someone who doesn't get it can spend so long - so very, very long - reading every notice beside every art installation in every room of every floor.

What did Littlest like best about the Tate Modern? - the enormous bubbles blown by a street entertainer outside. It was a pity that there had been a queue for the Bloomberg big draw screens.

As we walked along the Thames, structural art soared above us 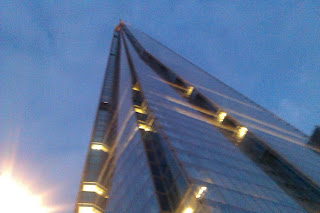 We had a marvelling mignon moment as we gazed up at the magnificent Shard. I wondered if our progress was halted in much the same way as ancient Eqyptians on first seeing the pyramids at Giza - a mixture of awe and pride in human inventiveness.

Art isn't just visual. I would argue for it being auditory too. And Friday night was an auditory treat. Which we all enjoyed.

All the King's Men (atkmlondon) were in excellent a cappella form. There is huge infectious joy from watching a collective expression of love of music, love of friends and love of true, honest fun, on a small stage, without any props and with only the energy of their voices and choreography. Amazing. And most definitely art.