Wordsmiths and trying to walk tables

November 29, 2015
Anyone who has dropped in here before will be aware of my fondness for words.

Discombobulated for example. We thought we were going for a walk but now we appear to be taking the table and a chair with us 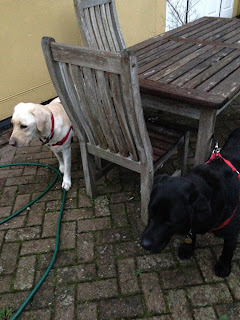 This Walking the Dog blog is an excuse to play with words. I love words - always - they run around inside my head playing hopscotch over each other, jostling until one wins, seizes the microphone and broadcasts itself as my ear-worm word of the day. Perhaps, this inner-ear perseveration - or personal juke box rolling over on repeat spitting out the same word again and again - is some form of obsessive compulsive disorder? Or a sign of incipient madness? Or maybe it's utterly normal for those who strive to be wordsmiths?

From Discombobulated on 7th November 2011 to Floccinaucinihilipilification on 16 March 2015, via Curmudgeonly (8/11/11) and Dreich, drookit and mauchit (20/1/12), I have written about, taken inspiration from and generally enjoyed playing with a motley and largely forgotten, ignored or frankly shunned-into-silence, sent-to-Coventry, and unrecognised-by-spell-checker vocabulary. Within my family, dreich is popular - onomatopoeic, with a forceful slide down into a world of gloom before it lands in a throat-clearing, blustery puddle - it inserts itself damply into our chatter during holidays in Scotland. I love curmudgeonly. I think it, or its noun, a lot. I say it less frequently. That would be rude. But saying it to yourself is secretly satisfying, cathartic and empowering even - it's surprising how much emotion can be muttered under your breath. I put such weight on the sound and shape and historical provenance and hidden meanings of words that I may end up accused of being an anti-floccinaucinihilipilificatrix. Huh!

Have you ever wondered where words come from? Who invented them? How, having been inserted into an individual's vocabulary for the first time, were they noticed by others, propagated and finally accepted by everyone as everyday language?

Shakespeare was famous for his invention of words. Or did he hear them in the street and hijack them for himself, merely adopting the role of seed sewer; scattering and propagating new(-ish) words across the pages of his plays? Words first attributed to him and still used today include gloomy, generous, swagger, zany, obscene, dwindle, fashionable, eyesore, assassination, rant and incredibly over 1000 more. Shakespeare, as wordsmith, was prolific but not alone - Dickens gave us boredom and snobbish; Milton invented Pandemonium; Lewis Carroll conjured up chortle; Dr Seuss introduced the nerd and where would we be without Chaucer's twitter? Four-legged-friend and Bertie Baggins would still have their noses on the ground - guzzling ground fall apples.


Guzzle incidentally first cropped up in the mid 1500s  and was used to good effect by a satirist named Tom Brown. It was probably derived from a French word, as too, were many of Shakespeare's new words. It was a time of change in English society with increased trade, travel and migration - the anglification of foreign words was perhaps inevitable. Maybe first occurring by mistake; with the better mistakes being picked up, run with and eventually adopted.

New words can also crop up when a noun is changed to a verb or a verb to a noun or in the case of blog becomes both noun and verb (the noun in this case appearing first).

Apart from Lewis Carroll's Jabberwocky with its slithy toves, mimsy borogoves and mome raths (... spell-checker knows slithy, mimsy and borogoves!) few words are truly invented. The light bulb moment, if it exists at all, is dependent on what went before - where the mistake, corruption or word-blending came from. A traceable evolution of originality, perhaps?

Before you mutter for goodness sake and contemplate pushing exit to make me vanish into thin air, I wish to suggest that there is method in my madness (three colloquialisms attributed to Shakespeare in one contrived sentence) for here I play with words and I post pictures of my dogs for the entertainment of who - myself; yes, you; hopefully. And all of a sudden (four!) I find I'm at the end. Nearly ...


P.S. Recombobulation was achieved after unhitching of leads and the walk accomplished without the addition of eight extra (rather heavy and inflexible) legs. 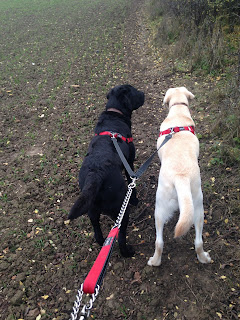