Life in a time of covid-19 - part 17: palindromes or not? And seeing ourselves for who we might have been.

When I started this post, it was 12/1/21 and I'm such an accomplished time-waster that I've left it to 17/1/21 to continue. While I'm not entirely sure why I didn't finish on the 12th ... apart from being entangled in a to-do list as long as both of my arms ... I've found time to come back today, despite that to-do list now needing the addition of the lengths of both of my legs to match its ever-stretching expanse. Procrastinate when busy is my motto - put off everything if at all possible. Ignore lists and swim before you sink. In other words, just ... write!

So, hopping back through time, what was going round inside my head on the 12th? It was the date: specifically, was it a palindromic date or not?

12/1/21 reads the same from left to right and from right to left but is not included in lists of palindromic dates on the internet. How unfair! I guess the conventional formats of MMDDYY or DDMMYY ie. 01/12/21 and 12/01/21 would not be palindromes but in my world - my scribbled shorthand when jotting down a date - I tend to miss out the 0 of the first 9 months and perhaps by doing so, I unconventionally turn my version of the date palindromic. I suspect I'm messing with the rules here. I suspect a pedant (aren't I usually one of those?) would be quick to point out the error of my ways; of messing with the month part of the dates.

So if mine isn't a palindrome, are there any other dates that are, in 2021?

In the UK, with the day part of the date first, there is only one, 12/02/2021 (February). Unless of course you count mine. Why is it acceptable to abbreviate the year from YYYY to YY and the month to M in the MDDYYYY format but not to have a single M in the DDMMYY format. If DDMYY were allowed 12/1/21 would be a palindrome. I'm calling it out as one!

In case your head is about to explode, here's a picture of Bertie Baggins in the snow yesterday 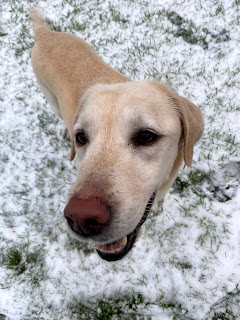 and of Four-legged-friend sensibly staying off the slushy grass 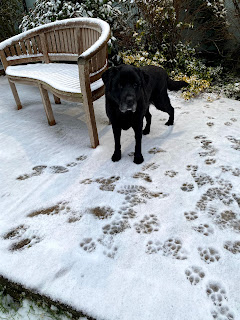 until he discovered that the patio was a bit slippery ... 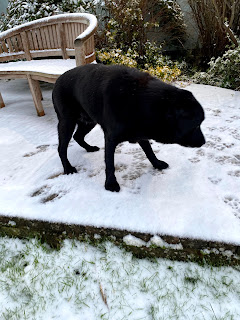 Will you forgive me if I go back to palindromes now ...?

Palindromes are odd things. The word comes from the Greek, palindromos.

There are simple ones, single words like kayak, radar and noon.

Made-up, onomatopoeic ones, like tattarrattat used by James Joyce in Ulysses; "I knew his tattarrattat at the door." My dogs know the tattarrattat of my feet on the floor - I'm the only one they wake to, if I need to fetch myself some water in the night.

There are complex ones eg. Never odd or even. Which irritates me because I correct it inside my head to never odd nor even, which of course would not be a palindrome.

Ones where the words read the same front to back but are pronounced differently and have different meanings eg. live and evil as in the palindromic sentence Rats live on no evil star. These are called semordnilaps which I thought was a joke, until I found it in more than one source - semordnilap is palindromes backwards.

There are musical ones eg. in Haydn's symphony 47, called Palindrome, the minuet and trio movements sound the same if they are played backwards.

If music can do it, poetry can at least attempt to do it, too. In poetic palindromes, the poem meets a half way point and then goes into reverse, so that the second half is the first half read backwards. As it sounds, this is phenomenally difficult to achieve and these poems are usually nonsensical gibberish (though of course there are exceptions to every rule - look up Doppelgänger by the poet Lindon - sinister, disturbing but clever).

Have I lost you yet? Hang on just a wee bit longer: there's an 'and finally' coming up next -

And finally (!),  there are the reflection palindromic names like Hannah, Eve, Anna, Otto, Elle, Bob and Viv.

The picture you see of yourself when you look in a mirror, that face reflected back, is the same but reversed. It is unique. No one else can see the exact same image because they're not seeing you with your eyes - only you can truly see this palindromic trick of the light that is you. I don't often look at my reflection and when I do, it tends to be a brief encounter with a face that looks older than I feel on my side of the mirror. Am I the only person who looks in the mirror and asks myself who are you?

I found this quote recently

and it got me thinking - is it really not too late?

And then I started thinking this ... maybe it's overthinking; maybe it's taking a metaphor too far, but bear with me ... what I thought next was 'don't let your life be a palindrome'* - don't let the end be the reverse of the beginning, written and determined by what went before. Think what might have been, had x,y and z not happened. What did I dream of? What haven't I done?

It's pointless having regrets about the past but hopeless to regret things that haven't happened yet - they're not written in stone; they will only happen if you let them. So I suggest you too, look at yourself in the mirror and ask 'what might I have been?'

Then ask yourself 'what's stopping me from being that person now?' If there are things in the way, plan for yourself to get round them - if your babies have to grow let them grow, but promise yourself you'll be the person you might have been - one day - later - in the future.

Me? I'm writing. That for me is a good thing. A writer is who I might have been and now who I want to be. I hope it's not too late.