A sunset, a dog walk, some aphorisms and a ramble about Commonplace books

The dust of exploded beliefs may make a fine sunset. 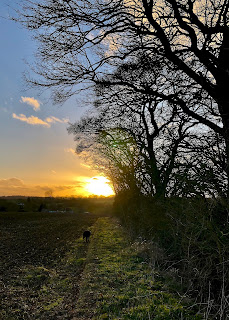 It is funny how we sometimes stumble upon something that inspires us to turn detective; to ask questions and then stay up too late researching the answers.

For example, consider the quote above - I had a photograph in need of a quote and I found this one about 'sunsets' (the word I looked up) and exploded beliefs (not what I was expecting). The words are  by Geoffrey Madan, 1895 - 1947, whose father had the marvellous name Falconer (disappointingly he wasn't one) and was master of Brasenose College, Oxford and librarian of the Bodleian. I'm guessing that with such an academic pedigree the young Geoffrey would have been introduced to books at a young age. And that this lead at some point to the compiling of lists of quotes and aphorisms for which he is or was famous.

*Short interlude here while I remind myself (and you, perhaps... ) exactly what an aphorism is. Think of a phrase or sentence that is brief and to-the-point; a nailing on the head if you like, with the role of hammer being played by the words and the nail playing the meaning. If I share some of my favourites (...'favourites' suggests I knew what an aphorism was all along - I did ... sort of: my study is covered in sticky notes bearing funny/motivational/inspiring/heart-warming sayings. I'd simply .... numpty-style! ... forgotten that these sayings were aphorisms!) - I think I need to start this sentence again: I'll share and you'll see what I mean -

Dare to think for yourself Voltaire

Somewhere something incredible is waiting to be known C Sagan

Art is not what you see, but what you make others see E Degas

Some people care too much, I think it's called love AA Milne

I think a lot of us compile lists of sayings, quotes, lyrics, jokes, headlines, words overheard and this is where I jump back in time to Geoffrey Madan - he collected aphorisms and wrote them down and sent lists of them to friends at Christmas. I have to say that I would rather receive a list of witty aphorisms than some of the blow-by-blow accounts we receive in seasonal round-robins; those Christmas letters detailing someone else's children's results in a history test in February; bronze badge in a skiing class in March; tennis tournaments in June; visit to Aunty Molly in September (I kid you not ... though Auntie Molly's name has been changed) and unfortunate fall in a rugby match - rush to hospital - nail-biting wait for the Xray results - and hobbling on crutches to support their team the following week, in November - no fracture in small print at the bottom of the page! (I'm feeling slightly guilty and ungrateful now, our friends' Christmas letters are not all this dreadful - if you're reading this, PS, please don't stop; that 'dreadful' a few words back, does not refer to you). Before I insult more of my friends (just how insulted, I'll be able to tell when this year's Christmas cards arrive; or don't!) I suggest we go back to Madan and specifically, how he recorded his aphorisms. He didn't have sticky notes. He didn't have a phone in his pocket; a pinterest account or indeed even a computer - instead, he wrote them into his Commonplace Book.

His Commonplace book. This is what made me stay up too late - reading, researching, shivering (the heating had gone off) and scribbling tired notes that would be illegible scratches on a crumpled sheet of paper the following morning.

Do other people do this? I hope it's not just me who chases rabbits down holes until I know everything (or if not everything - because it is impossible to know everything - then some little nugget of an interesting (to me) something). And there are so many holes to go down ... (if you don't fancy a bit of rabbit-holing-research, skip the next two paragraphs ... )

Following Madan down this particular hole revealed that I am guilty of making assumptions or perhaps, given what I am about to say, of not assuming enough. Why hadn't I heard of Commonplace books? My research leapt to twelfth century Italy and the education of children and students; specifically, how did they learn? What were the mechanisms of learning then? I'd never really thought about this before. There were no videos, no Ted-talks, no audiobooks, no on-line libraries, no television, no laptops, no classroom smart-screens. Italian scholars, it turns out, had developed a system of collecting quotations in one place, written into books - they likened it to collecting flowers and called their books of quotations 'florilegia'. These were like scrapbooks and over time they developed into Commonplace books. Erasmus, that exceedingly brainy Dutch fellow, wrote a system for Commonplacing, emphasising its role in education: read, record and learn. Later still, the English philosopher John Locke developed his New Method for Commonplace books, describing it as 'the act of putting in order those things which are choice or excellent or have an elegancy of expression'.

These Commonplace books were a window into a man's interests and mind. A father would pass his Commonplace book to his son hoping that in it, he would learn something of his father and also, perhaps, how to run his father's business or estates. Students at universities copied extracts from printed books into their Commonplace books adding their thoughts and the comments of others, building a database of opinions and analyses. Many great writers and thinkers kept Commonplace books - Francis Bacon, Samuel Johnson, John Milton, Virginia Wolf - and the system first listed and puzzled over in his Commonplace book grew into Carl Linnaeus's classification that first named us Homo sapiens.

Why don't we have Commonplace books now?

Well, we do. What is this if not my Commonplace book? Instagram is my Commonplace book of photographs (@herbiecax). I have a Commonplace note-book by Moleskine where I list the books I've read (when I remember). Twitter (@HerbieCax) is my Commonplace scrapbook of artists and writers and actors and influencers that I like to follow. Bucket lists are a record of dreams written in aspirational Commonplace (often virtual-) books. Wherever we gather notes, sayings, letters, receipts, theatre tickets, old passports, newspaper cuttings, school reports, etc, we are Commonplacing.

The dust of exploded beliefs may make a fine sunset.

I wonder what beliefs you might choose to explode. I'd explode several. I'd pulverise them so absolutely that their dust would be near to nothingness. It would be right and fun and immensely satisfying. These would be the bad beliefs at the top of my list - that climate change is a myth; that Brexit was ever a good idea; that building a wall will solve America's problems; that Donald Trump has the best words; that chocolate won't make me fat; that being a writer is easy; that we are too small to have a voice; that animals don't have feelings; that the West Coast of Scotland midge isn't - as either Spike Milligan or Para Handy claimed - as fierce as a Bengal tiger; and that one day I'll grow bored of this.