Procrastination is the thief of time ...

I know this and yet I continue to allow procrastination to steal away my time every day. Charles Dickens also knew this which is perhaps why his completed quote reads

Procrastination is the thief of time, collar him.

I wonder if he found it as frustrating as I do?

Dickens was born on February 7th 1812 which makes this the 207th anniversary of his birth -  not his '207th birthday.' I'm being pedantic perhaps, but there is no wheeling the double-centenarian out in a chair, brushing the dust off his lips and watching him blow out a forest of candles.

I wonder what he would make of his fame, if he could see his books still in print today. And marvel at the many films and television series. And hear us quoting him in everyday speech - words like butterfingers and flummox were brought into everyday use by him. He used devil-me-care in Pickwick Papers and this continues to be used as an apt description of reckless behaviour. Everyone knows Scrooge and what to behave like a bit-of-a-Scrooge means. And what would Christmas be without a Christmas Carol? His legacy is huge. What would he make of it?
He'd probably sit back in his chair, one hand resting on the head of his trusted Mastiff, Turk, and observe on his face a small, modest but satisfied smile, as reflected back at him in one of the many mirrors that reputedly covered his study wall.

Dickens was a dog man. He owned several, though not all at once. From Timber, a spaniel he acquired while on tour promoting his books in America; to the huge dogs - St Bernard, Mastiff and Bloodhound - guarding his country estate at Gad's-hill Place in Kent; to later in his life, a Pomeranian called Mrs Bouncer. These real four-legged-friends were perhaps the embodiment of the dreams of the unhappy little boy who passed a carving of a dog eating from an iron pot every day on his way to and from the blacking factory, where he worked while his family languished in a debtors' prison.

Dickens didn't just own dogs, he wrote them into his books too, usually as a device to shed light on a human character. Bulls-eye, for example, with 'a face scratched and torn in twenty places' reflects the brutality of his master Bill Sikes, in Oliver Twist. Remember Sikes - the thief and kidnapper who murders his girl-friend, Nancy?
Despite his harsh treatment at the hands of his master, Bulls-eye remains loyal - in a way that perhaps only a dog can - 'waiting with a wistful look' while Bill sleeps. There is irony and tragedy in their relationship - without Bulls-eye Bill might have escaped and would arguably have grown into an even more terrifying monster. Without his dog, Bill's story would lose any poignancy - that Bulls-eye leaps in one last desperate, faithful gesture to join Bill's body and instead falls to his death does, quite remarkably and shockingly, make us feel some sympathy for both of these otherwise despicable characters. We are, after all, a nation of dog-lovers and from Grey Friars Bobby to Bulls-Eye, we recognise unbreakable loyalty. Dickens' skill was to use Bulls-eye to bring, right at the end of the story, some small, tenuous, glimmer of humanity to his villain, Bill.

These - neither scratched nor torn - are my boys, Four-legged-friend and Bertie Baggins, on a walk this afternoon - 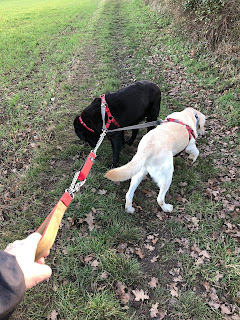 And - sticking to the Dickensian theme - like shaggy Diogenes, in Dombey and Son who got stuck after 'winding a long chain that dangled from his neck round the legs of chairs and tables,' they did first this ... 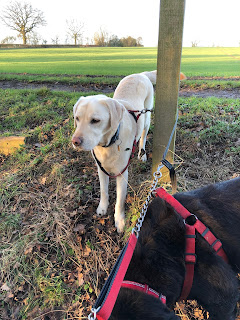 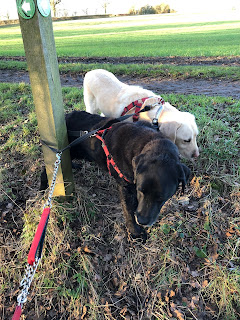 
Also, attributed to Dickens is this quote -


And can it be that in a world so full and busy, the loss of one weak creature
makes a void in any heart, so wide and deep
that nothing but the width and depth of eternity can fill it up.

I read those words and wonder between us and the dog which is the creature.

There is unquestionable more in the minds of all animals than they ordinarily get credit for. 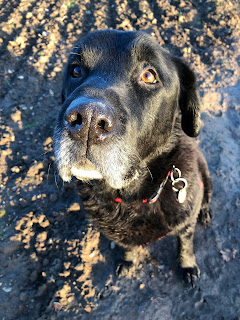 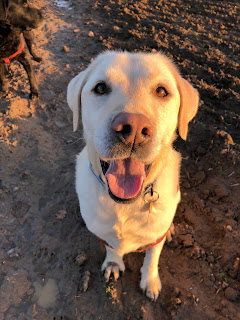 I suspect the main thing in the minds of these two was 'we know there are biscuits in your pocket and if we sit you might - pleeeeeeeeease - give us one' and 'how soon can we get home to do this' ... 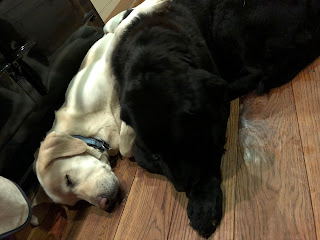 Life in the slow lane - Part One.

Been in the garden all day. Time for a bath first then I'll leave, with you by 8. Chilly here - have you had snow? See you soon. Lots of  love xx
PS. Bought too many aubergines yesterday - would you like some?

All very mundane; boring even? Hmmm.

In an effort to save time or appear somehow with-it or hip or whatever term is used now to mean 'not ancient', the parent could instead have sent this -

Yes, I punctuate my texts.

Punctuation, however, isn't the point here. Or rather it's not the only thing unmasking me as someone who is not hip/cool/sic or lit (which list, of course, proves without a doubt that I am none of these things).

No. The point is that with the insertion of a few emojis, I changed an innocent message about gardening, the weather and vegetables, into something x-rated and made myself …
Post a Comment
Read more

Time doesn’t stand still. I've said that before. In November's blog. I called it out as a cliche then too. It is. But if cliches can be good and I think this is a good one. Time is animated. Time moves. I wittered on about this at length. In November. Two months ago. Two months filled with frantic present hunting; over-eating; over-spending; under-sleeping; and wrapping (always late on Christmas eve - so late that I risk Father Christmas finding me sitting on the floor surrounded by paper and string - the sellotape always runs out at about 11.57pm on Christmas Eve, doesn't it? - hot chocolate insul…
Post a Comment
Read more

A sunset, a dog walk, some aphorisms and a ramble about Commonplace books

February 16, 2019
The dust of exploded beliefs may make a fine sunset.


It is funny how we sometimes stumble upon something that inspires us to turn detective; to ask questions and then stay up too late researching the answers.
For example, consider the quote above - I had a photograph in need of a quote and I found this one about 'sunsets' (the word I looked up) and exploded beliefs (not what I was expecting). The words are  by Geoffrey Madan, 1895 - 1947, whose father had the marvellous name Falconer (disappointingly he wasn't one) and was master of Brasenose College, Oxford and librarian of the Bodleian. I'm guessing that with such an academic pedigree the young Geoffrey would have been introduced to books at a young age. And that this lead at some point to the compiling of lists of quotes and aphorisms for which he is or was famous.
*Short interlude here while I remind myself (and you, perhaps... ) exactly what an aphorism is. Think of a phrase or sentence that is brief and to-the-p…
Post a Comment
Read more